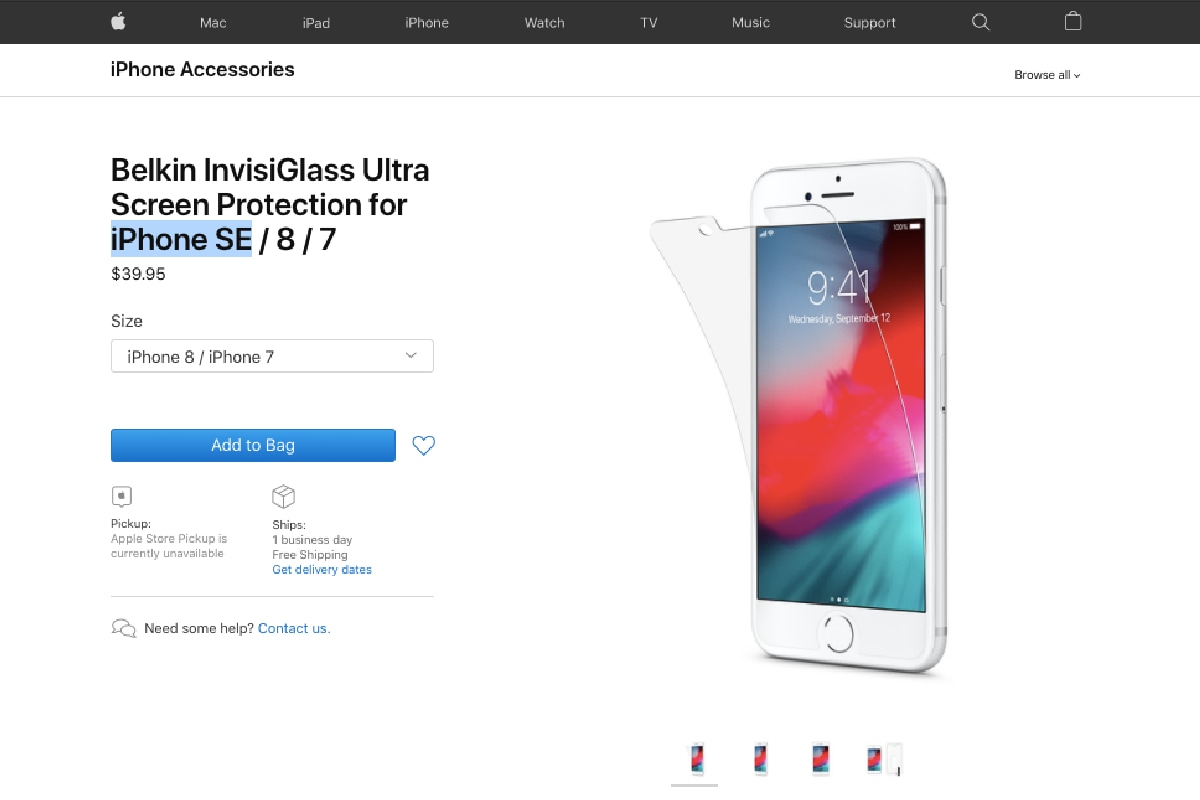 Apple seems to be all set to launch its anticipated 4.7-inch iPhone and it is reported to be called “iPhone SE” 2020 model. This is unlike the previous rumours that suggested it as the iPhone 9 or the iPhone SE 2. While the Cupertino, California-based company is yet to make the announcement, a Belkin screen protector for the new iPhone SE model has been listed on the official Apple Store, giving further credibility to iPhone SE (2020) name and its existence. The online listing also gives credence to the reports about the new low-cost iPhone using iPhone 8 design. Separately, colour options and storage variants of the upcoming iPhone SE model have also surfaced online.

The listing on the online Apple Store shows the Belkin InvisiGlass Ultra Screen Protection that is listed to be compatible with the iPhone 8 and iPhone 7 as well as the new iPhone SE. This means that there won’t be any differences in terms of the design of the next-generation iPhone SE and the iPhone 8 that was launched back in 2017 with the design identical to that of the iPhone 7. Some previous rumours already claimed that the new entry-level iPhone will come in the chassis of the iPhone 8.

Apple is offering the screen protector in both 4.7- and 5.5-inch sizes. However, the latter is limited to the iPhone 7 and iPhone 8. This is contrary to some earlier reports that had suggested a bigger iPhone SE model also in the pipeline — alongside the regular model. Nevertheless, the company may include both in its official announcement.

The online listing was first noticed by YouTuber Aaron Zollo earlier today and its existence has been confirmed by Gadgets 360. This suggests that the iPhone SE (2020) launch could be imminent.

In addition to the listing of the screen protector, 9to5Mac has reported some fresh details about the new iPhone SE. The upcoming model is said to have three colour options, namely Black, White, and PRODUCT (Red). It is also reported to be joined by five distinct official cases in silicone and leather materials, and will be offered in three storage options — 64GB, 128GB, and 256GB.

Previous reports have suggested that the new iPhone SE price could be set at $399 (roughly Rs. 30,300). It is also likely to retain the Touch ID fingerprint sensor, though you wouldn’t get 3D Touch support that was there on the iPhone 8.

Apple may make the announcement of the new iPhone SE very soon, a sentiment echoed by 9to5Mac, but considering the coronavirus outbreak across the globe, it is likely to face some supply delays.