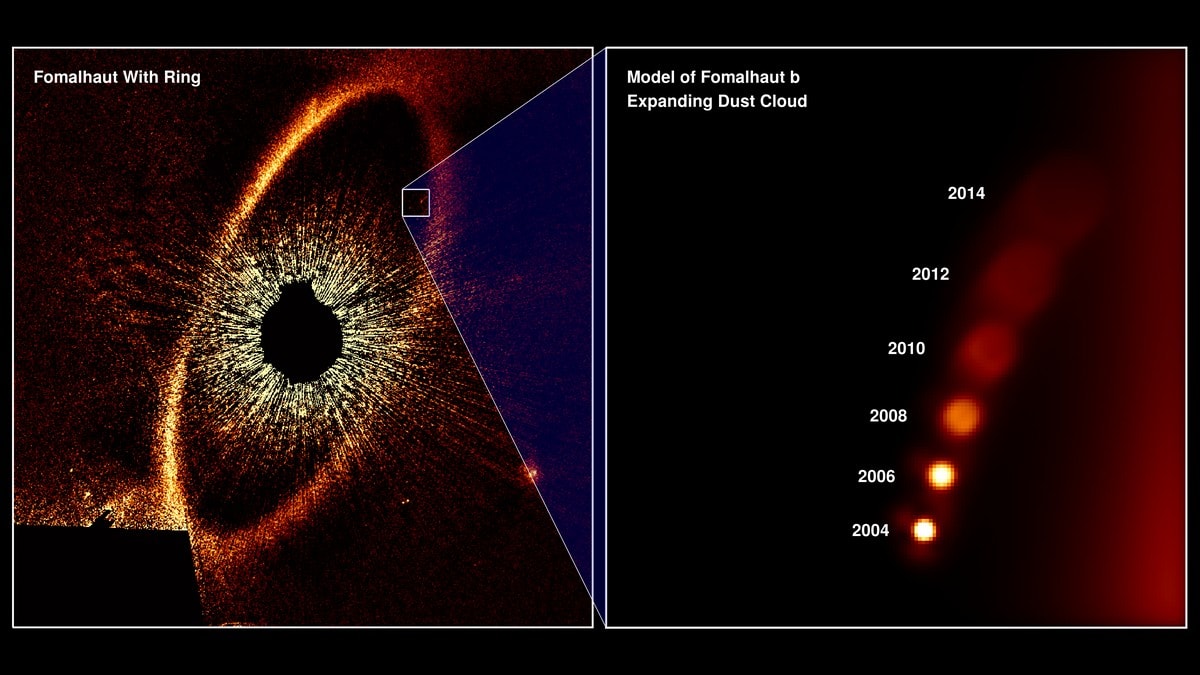 An exoplanet that was last seen by astronomers orbiting its star, Fomalhault, 25 light years away, is nowhere to be seen. It has been suggested that the supposed planet could actually be a dust cloud that formed after the collision of two icy bodies. The disappeared object, called Fomalhault b, was first revealed in 2008, based on observations from 2004 and 2006. It remained visible for several years in Hubble telescope observations. However, to the disbelief of astronomers, the object disappeared in the images taken by the telescope in 2014.

During the initial studies, questions had started arising about this supposed planet. Fomalhault b was “unusually bright in visible light, but did not have any detectable infrared heat signature,” according to NASA. A planet is usually warm enough to shine in the infrared. The brightness may have been coming from the ring of dust that formed due to the smashing of two bodies.

“Our study, which analysed all available archival Hubble data on Fomalhaut revealed several characteristics that together paint a picture that the planet-sized object may never have existed in the first place,” said András Gáspár of the University of Arizona, Tucson.

Ultimately, after analysis of Hubble images taken in 2014, it was found that Fomalhault b has ceased to be visible after fading continuously with time.

Experts believe that the shell of dust formed due to the smashing of two bodies is gradually expanding in the space. Because it is a ring of icy debris, colliding bodies would have been a mixture of ice and dust. The cloud can’t be detected by the Hubble telescope anymore because the dust particles are around 1 micron (1/50th the diameter of a human hair) in size, below the detection limits of the telescope. The dust cloud is said to have expanded by now to a size larger than the orbit of Earth around the Sun.

Collisions like these are estimated to happen once every 2 lakh years around Fomalhault.

“These collisions are exceedingly rare and so this is a big deal that we actually get to see one,” said András Gáspár of the University of Arizona, Tucson. “We believe that we were at the right place at the right time to have witnessed such an unlikely event with NASA’s Hubble Space Telescope.”

Astronomers will now observe the Fomalhaut system using NASA’s upcoming James Webb Space Telescope. They will be looking for actual planets revolving around the Fomalhault star.