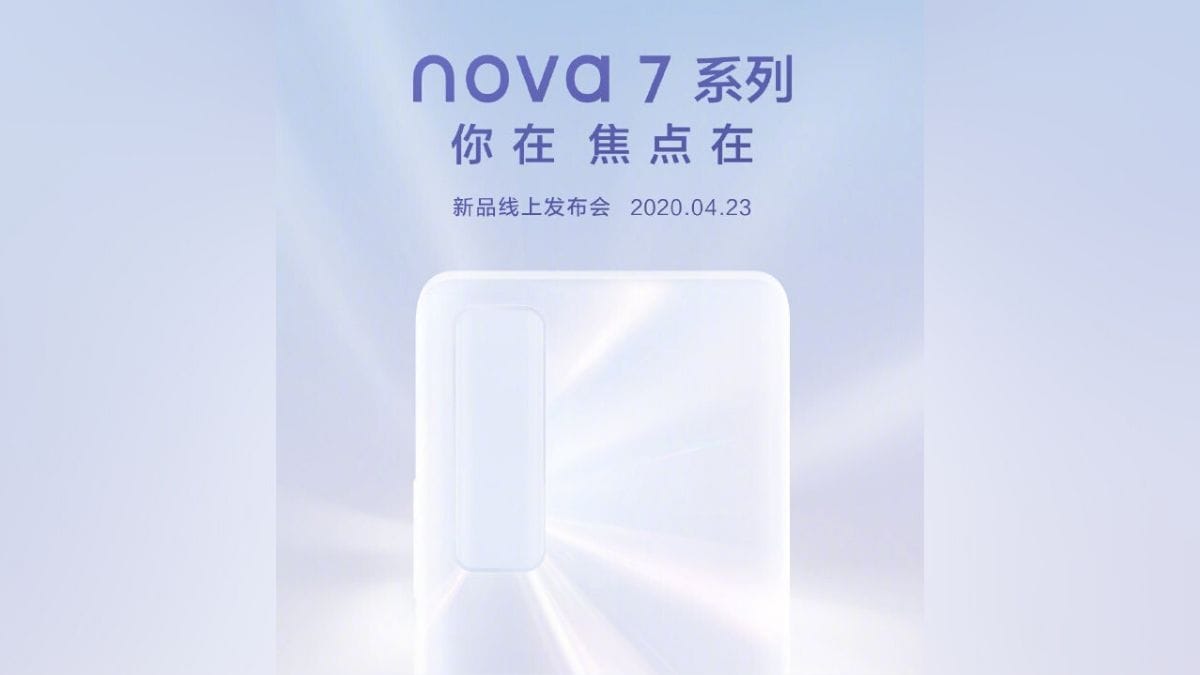 Huawei has confirmed that its Nova 7-series smartphones will be launched on April 23. The announcement was made on Thursday on Chinese micro-blogging website, Weibo. At the moment, the Chinese tech company has not revealed the phones’ major specifications or pricing. It is also unclear whether the phones will be launched in India. Meanwhile, another post on Weibo has been doing rounds where we can see the quad rear camera setup of one of the Huawei Nova 7 smartphones. The post also boasts about the phone’s periscope camera setup that will reportedly offer up to 50x zoom.

Huawei’s post on Weibo reveals that the Nova 7 series will come with vertically stacked rear cameras. However, the teaser poster does not highlight other details such as its processor, camera setup, and more. The phone lineup of the Nova 7 series is also unclear at the moment as previous reports have suggested that the series will include Huawei Nova 7 SE, Nova 7, and Nova 7 Pro.

As mentioned earlier, Huawei has not yet revealed the specifications of the aforementioned smartphones. However, several reports have suggested that Huawei’s upcoming series will have 5G support. It was also reported that the Nova 7 and Nova 7 Pro will be powered by Kirin 820 SoC and Kirin 990 SoC, respectively. Additionally, both Nova 7 and Nova 7 Pro are tipped to support 40W fast charging.

On the other hand, the Huawei Nova 7 SE variant is reported to feature a 6.5-inch hole-punch display and a 64-megapixel main camera. The phone is rumoured to support 22.5W fast charging.

Meanwhile, another post on Weibo that shows an alleged promo poster of the Huawei Nova 7 series that shows the quad camera setup on the back of the phone with periscope-style camera capable of offering 50x zoom support. Moreover, the poster also highlights the dual front cameras along with the red, purple and white colour options. It is unclear exactly which smartphone is present in promo poster – Nova 7 SE, Nova 7, or Nova 7 Pro.