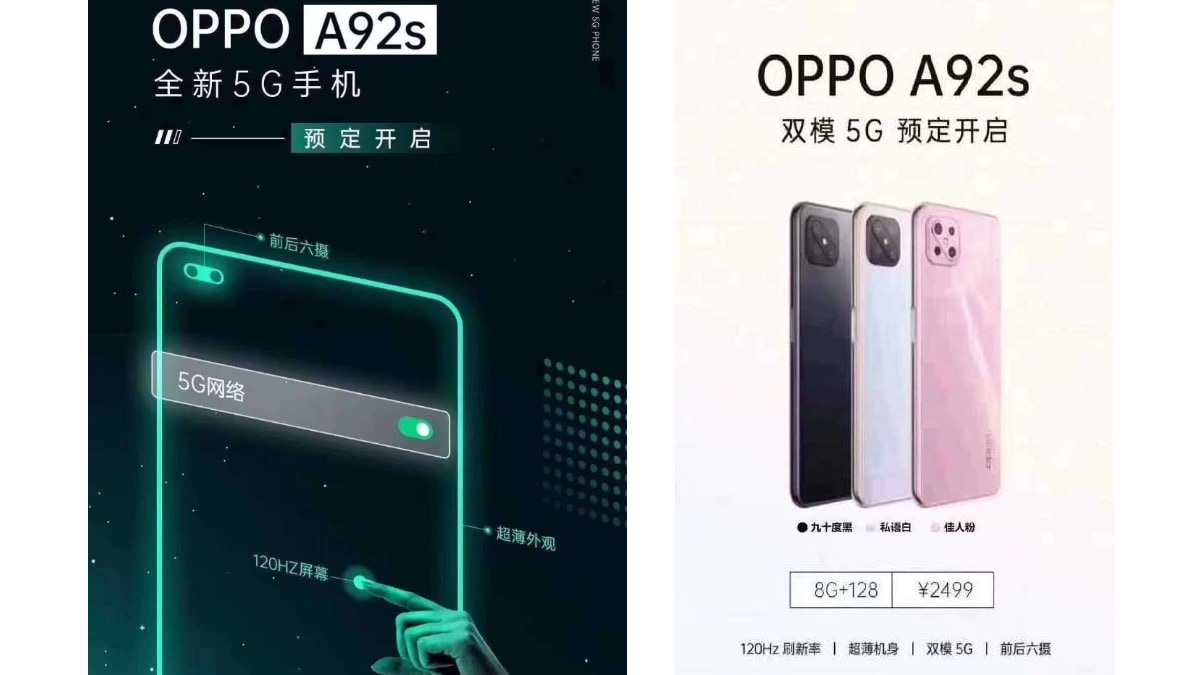 Previously rumoured Oppo A12 has bagged Bluetooth SIG certification alongside two unknown Oppo devices with model numbers CPH2067 and CPH2069. A new Oppo A92s phone has also leaked online and pricing information, key specification details, design language, and three colour options of the phone have been tipped. Two new Oppo phones have been spotted on TENAA revealing key details about these phones. All in all, these leaks suggest that Oppo is busy working on numerous phones to launch in the future.

Starting with the alleged Oppo A92s, it has been leaked in an official-looking poster on Weibo. This poster suggests that the phone will come with a 120Hz display refresh rate (or touch sampling rate) and offer 5G support. This new phone is tipped to carry the model number PDKM00, and it has also been spotted on MIIT and TENAA as well. The MIIT listing suggests that the Oppo A92s features a 6.57-inch dual hole-punch display, and is powered by the MediaTek Dimensity 800 5G processor. It should pack LPDDR4X RAM, UFS 2.1 storage, and a large 4,000mAh battery with 18W fast charging support.

As for cameras, the Oppo A92s is listed to feature a quad camera setup with a 48-megapixel Sony IMX586 main camera, an 8-megapixel ultra-wide angle sensor, and two 2-megapixel cameras. Up front, the phone has a 16-megapixel and 2-megapaixel selfie cameras. Furthermore, the listing says that the phone has 8.1mm thickness, and weighs 184 grams. The tipped TENAA listing has similar specifications, but it lists the battery to be at 3,890mAh.

Apart from specifications, the Oppo A92s has also leaked in another poster by Xiaomishka that reveals its design, price, and even colour options. The phone is listed to come in an 8GB RAM + 1298GB storage configuration, and is tipped to be priced at CNY 2,499 (roughly Rs. 27,000). The phone is seen to sport a unique quad camera setup design on the top left corner. The cameras are inside a square-shaped module, with adjacent cameras and flash outlined in a pill-shaped design. The official poster shows a side fingerprint sensor, and the phone can be seen in Black, White, and Pink finishes.

Coming to the Oppo A12, the device has been spotted on Bluetooth SIG certification site with model number CPH2083. The listing reveals that the phone will feature a 6.22-inch HD+ display, and be powered by a 2GHz Mediatek octa-core processor. It packs a 4,230mAh battery, features Bluetooth v5, and offers 2.4GHz and 5GHz Wi-Fi support. It is also listed to run on ColorOS 6.1.2. The Oppo A12 has been listed earlier on the IMDA site with the same model number.

Two unidentified Oppo phones with model numbers CPH2067 and CPH2069 were also spotted on Bluetooth SIG site. The listing suggests that the two phones will run on ColorOS 7.0 and support Bluetooth 5.0. Details on these two phones are scarce at the moment, and there’s no clarity on what they may be called.